I met Erin Kennedy earlier this year at Studio [Y] at the MaRS Discovery District where she is a fellow working on her latest project, Robot Missions.  I first came across Erin’s work, RoboBrrds, when Erin won the Cloud Robotics hackathon in Montreal in the fall of 2011.  Erin was  has grown that project into a successful IndieGogo campaign in December 2012 and now into a commercial kit you can build yourself. 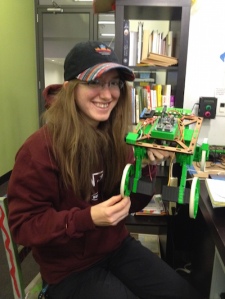 Erin’s latest project is Robot Missions ( www.robotmissions.org ) where she is designing, building and testing a robot that will help clean shore lines.  The project isn’t simply another rover, Erin’s mission is to get humanitarians and technologists to collaborate on the massive challenge of environment clean-up. To that end she is working to engage a diverse community to work with her on the project. A fervent advocate of Socially Conscious Making, Erin wants to work with people on projects with a strong social mission. 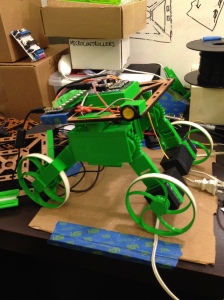 Erin is acutely aware of the perceived tension between nature and technology.  She would like to see more work in applying technology to help nature rather than projects in which technology harms nature.

The Robot Missions project started as a CubeSat rover robot for trips to Mars (the planet) as part of Erin’s time at Fab Academy 2015. It included her own origami design for an unfolding solar panel to power the robot. Erin also integrated an headset with motion sensors so that she could control the robot with the movement of her head.

You can often find Erin at Studio [Y] experimenting with new filament for her 3D printer or making plug-ins for her favourite CAD program so she can model her origami mechanical designs. The goal is not to create a prototype robot but to create a Rapidly Deployable Automated System platform that is  flexible enough so that other makers can take and transform it and humanitarians can manufacture the robot quickly with little support.

Robot Missions is still in its very early stages but there are lots of opportunity to collaborate with Erin and create something amazing.  Robot Missions  needs:

On April 6, at the Get Your Bot On! Meetup Erin will be demonstrating the Robot Missions robot and talking more about her work.  We will break into working groups to tackle some of the challenges faced by the project. Come to find out more about her work and see the robot in action. Sign up for the Meetup HERE.

Have a few hours this weekend?  Join Erin for her field test at the Leslie Spit this Saturday, April 2. Volunteers working with Robot Missions will be testing the most recent shoreline cleaning robot prototype. More details at :

Be sure to follow Erin on Twitter to hear about her projects and the Robot Missions field tests.

Or hang out with Erin at her Robot Party on Google+ Hangouts.  Passionate robot makers show off their robot projects and share ideas and advice. See the previous Robot Party here, with the theme of “Who does your robot help?”.

See you next week!